Cat Mummy: Cat mummies were used for an individual to communicate with a deity. In the case of cats, the mummies were used as votive offerings for the goddesses Bastet and Sekhmet. Bastet was the protector of the home whereas Sekhmet was the goddess of war, plague, and healing. This animal mummy dates back to the Ptolemaic Period (305 BCE – 30 BCE). Mummies can often be dated through the style of the wrappings. In the case of this cat mummy, there are false doors on the wrappings, which is a style found during the Ptolemaic Period. Unfortunately, not all animal mummies contain a full specimen. Some deities had a huge following and in order to provide many offerings, people often forged animal mummies. By taking scraps of an animal and combining them with clay, wood and various other materials, faux animal mummies were created. In the case of this cat mummy, the wrappings show signs of wear and, on the back, a few of the bones are exposed. One can even see a muzzle in the front! 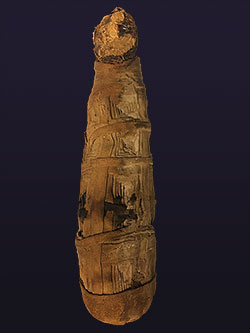 Badari Pot: A good example of Black-topped red wear, this pot dates back to Predynastic Egypt (5000-3000 BCE). The pot was found in the Badari region, an area located between the ancient cities of Matmar and Qau. The Badari region hosted cemeteries that were known for having this type of clayware. Ancient Egyptians would take the clay found in the banks of the Nile river, mold it, and then leave it to dry. The pot would then be coated and lightly polished with stone, and fired in a kiln. The coloration was achieved through exposing different areas of the pot with oxygen. Areas exposed to oxygen would produce a red coloration and areas deprived of oxygen produced a black coloration. Pots like these, were used to store items an individual may need to take into the afterlife, such as grain or even beer! 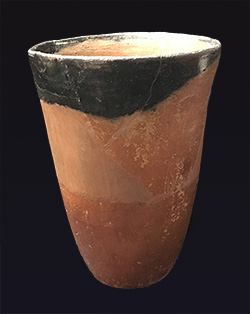 Faience Tile: These tiles come from the subterranean galleries of the Pharaoh Djoser’s tomb in the Step Pyramid, dating back to the Old Kingdom (2600 BCE). Made from quartz and sand, faience is a material used to make items as varied as bowls, amulets, statues, and tiles. The tiles in this case were used to cover the walls inside the Step Pyramid. The tiles would be strung together in the back and then mounted on the wall, creating a reed-mat facade. The turquoise color was important to the Ancient Egyptians, as the blues and greens were associated with royalty, fertility, and both life and afterlife. 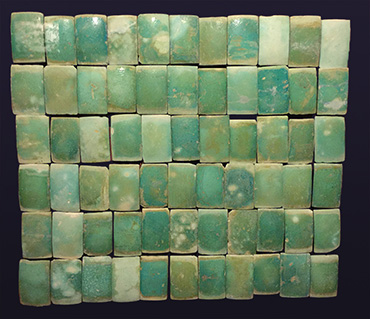 Carnelian Necklace: This necklace dates back to Predynastic Egypt (5000 – 3000 BCE), and is primarily composed of carnelian. The red orange color was associated with various figures in Ancient Egyptian mythology. Carnelian often represented the sun and its associated deities: Re, Sekhmet, Seth, Horus, etc... Though the color also represented chaos and anger, it was believed to be associated with life and victory. Jewelers would use a bow drill to make holes in each stone, which were then strung together to make the necklace. The string would be made using a fibrous material such as flax or hemp. Over time, the string would deteriorate, but the beading would remain.