Learn about the most important artifact that helped Egyptologists to decipher hieroglyphs. Currently housed in the British Museum, the stone allowed scholars to decode what was once a dead language.

Many had attempted translations of Egyptian writing, as it was incredibly prolific, but most early attempts were little more than guesses. The Rosetta Stone, found by Napoleon in the port town of Rosetta in 1799, was the key to solving the mystery. This undertaking however, was not a simple one. Simply knowing that the hieroglyphic inscription was likely identical in content to the Greek had been useful to scholars at the time of its discovery, but there was still much work to be done. Two men were eventually given the bulk of the credit for the decipherment: Thomas Young of England and Jean-Francois Champollion of France.

Young was able to create a full translation of the Demotic script from the middle register of the Rosetta Stone. He recognized that Coptic, a surviving liturgical language in Egypt, was closely related to the Ancient Egyptian language and believed Demotic script was essentially the ancient written form of Coptic. His truly revolutionary advancement though, was figuring out that Demotic was formed not only of a phonetic alphabet, but also characters that represent entire ideas.

Champollion was the first to create an accurate grammar for hieroglyphs. His great achievement was realizing that while hieroglyphs were primarily phonetic, it contained a large number of logographic elements, as well as special characters known as determinatives. Champollion created a system that could translate hieroglyphs found anywhere in Egypt reliably and decipher the meaning behind them.

And so, in 1822, people were again able to read what the Ancient Egyptians had left us. We regained 3,000 years of information that had been previously lost.  In the case of the Rosetta stone, it was created during the Ptolemaic Period to commemorate the achievements of the Pharaoh Ptolemy V. It was written in three different scripts so that any literate person would be able to understand it.

To learn more about what the Rosetta Stone can teach us about Hieroglyphs and other languages, please join us for our Rosetta Stone workshop every 4th Sunday of the month at 12:30 pm! 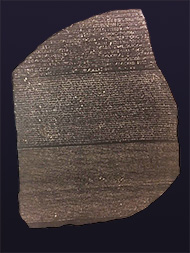