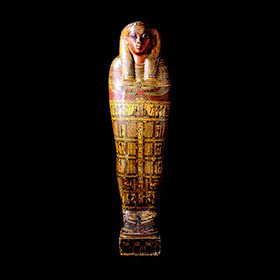 Once again Egypt let its foreign conquests, especially those in western Asia, slip away. Labor strikes, economic woes, and revolts from within the country weakened Egypt’s pharaohs until a number of concurrent kings and princes divided the country among themselves.

During the Third Intermediate Period, confusion reigned supreme. Egyptian rulers (based in Northern Egypt) clashed with Nubians (ruling from Thebes) who saw themselves as the heirs of Egypt’s Empire.

Egypt’s Nubian kings looked back to artwork from periods of stability. They depicted themselves in traditional ways to assert their “Egyptian-ness.”

Artifacts from the Third Intermediate Period