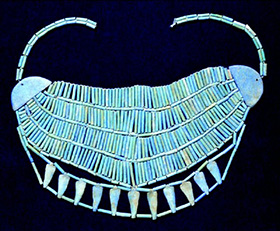 Egypt was reunited, but things had changed. Pyramids were smaller and there was less wealth in the hands of the rulers. However, the middle class gained access to consumer items such as jewelry and books (in scroll form).

The Middle Kingdom was a time of great literature. Scribes would copy the stories and instructional writings of this time for thousands of years hence.

Middle Kingdom pharaohs strengthened their borders by building fortresses in the western and eastern delta to keep out invading Libyans and peoples of the Levant, respectively. In Nubia, to the south, the Egyptians maintained or expanded extensive outposts dating back to the Old Kingdom.

Artifacts from the Middle Kingdom Period