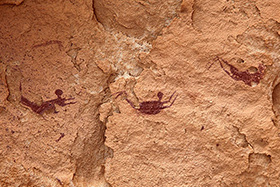 The first evidence of habitation in Egypt dates to 1.8 million years ago. Early modern humans traveled up through Egypt on their journey to Europe and other lands.

Neolithic people lived in egalitarian communities as farmers and herders. As the climate dried out, part of a natural cycle, more people moved to the still-lush Nile River Valley.

As people began to live closer together, they began to organize their society and specialize tasks in order to function more efficiently. Eventually, simple governments formed.

Artifacts from the Neolithic Period