The Saite Period and Late Period 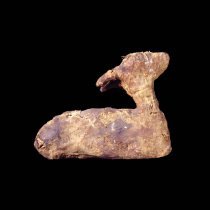 The Assyrians (in the northeastern part of modern Iraq) invaded Egypt in 663 BCE. They drove out the Nubians and then, distracted by troubles at home, they left Egypt to its own devices. Psamtik, an Egyptian king of Libyan descent, set up the Twenty-sixth Dynasty.

Like the Nubians before them, the Saite kings emulated the traditions, art, and large private tombs of earlier times.

This revival did not last long. The Persians (from modern-day Iran) occupied Egypt (twice) until Alexander the Great arrived in 332 BCE. Egypt would be ruled by foreign powers from the time of the Persian invasions until 1952 CE, when she gained her independence from the British.

Artifacts from the Saite and Late Periods