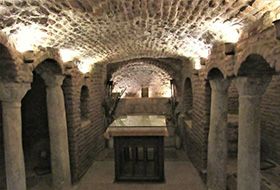 This Coptic church was built in Old Cairo sometime in the fourth century CE. Legend has it that the site was chosen because it sits on a cave where Jesus, Mary, and Joseph rested for a time at the end of their flight as refugees in Egypt from King Herod’s persecution back in Palestine.

The church has burned and been restored several times across the centuries, suffering its first conflagration in 750. It was last restored in 2000.

The church’s name is a dedication to two saints revered in older Christian denominations. Sergius and Bacchus were allegedly high-ranking officers in the Roman army who were outed as secret Christians before being tortured and killed. While doubt has since been cast on the legend, many churches throughout the Mediterranean region bear their names.