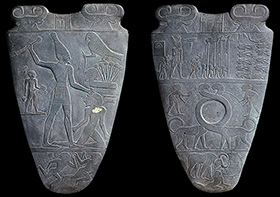 Narmer's identity is the subject of ongoing debates, although the dominant opinion among Egyptologists identifies Narmer with the pharaoh Menes. Egyptologist Flinders Petrie (1853-1942 CE) claimed that Narmer and Menes were the same person: Narmer was his name and Menes was an honorific title.

A palette of carved siltstone used to grind cosmetics found by Egyptologists in 1897 supports the theory that Narmer was the unifier of Egypt. On one side of the palette, it shows him wearing a white war crown of Upper Egypt, bashing an enemy. On the other side, it shows him wearing a red wicker crown of Lower Egypt as he surveys the bodies of his enemies, which many interpret to be a testament to his military unification of both lands. Later historians left his name out of the King Lists but Egyptologists have found many items mentioning him.

Image: The Narmer Palette at the Egyptian Museum Cairo, Egypt.