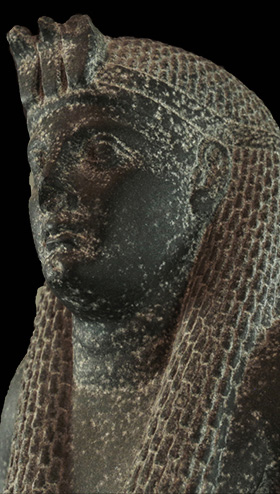 One of the most well known people in history, Cleopatra VII was the last pharaoh of Egypt. She was a Macedonian Greek who ruled Egypt for nearly three decades. Known for her intelligence, she was her father’s favorite. She gained the throne at age eighteen and was intended to rule alongside her ten-year-old brother, Ptolemy, as co-regent. Soon thereafter, advisors in the royal palace conspired against Cleopatra and she was forced to flee to Syria. She secretly asked Julius Caesar (100-44 BCE), the Roman general and politician, for help when he was in Alexandria searching for Pompey.

When General Marc Antony (83-30 BCE) was sent from Rome to Egypt, he and Cleopatra began a long love affair. They had three children together. At the time, Antony was married to the sister of Octavian, who later became Augustus Caesar, and with whom Antony co-ruled the then-Roman Republic. While ruling the eastern part of the republic, Antony asked the Roman Senate to confirm his decision to give vast swaths of Roman territory to Cleopatra and their children. This, in addition to Antony’s desire (as stated in his illegally exposed official will) to be buried outside of Rome, enraged the Roman people and the Senate. Octavian, seeking full power over Rome, blamed the foreigner Cleopatra for creating the situation, leading the Senate to declare war against her, and thus forcing Antony to defend her in battle.

The couple lost the war after a naval battle with Octavian’s navy. Cleopatra’s reign soon ended and Roman rule over Egypt began. Marc Antony committed suicide by falling on his own sword. Traditional stories claim that Cleopatra also committed suicide by allowing herself to be bitten by an asp. Despite her tragic end, Cleopatra is very well known in modern times and admired.