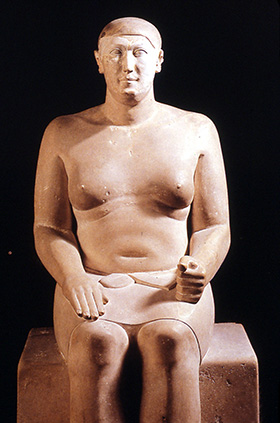 Hemiunu was a high-ranking official who lived during the reign of Pharaoh Khufu (Cheops in Greek). He was the son of Prince Neferma'at and Princess Atet, the grandson of Pharaoh Snefru, and the nephew of Pharaoh Khufu. Hemiunu served as vizier and royal seal bearer to Khufu and was probably responsible for building Khufu’s pyramid at Giza – the Great Pyramid.

Hemiunu is known for a well-preserved mortuary statue of him that was found within his tomb. Statues such as this could serve as a home for the soul of the deceased or as a means to worship their image. It would list the name of the departed as well as their titles. Hemiunu’s titles included: Member of the Elite, Vizier, King’s Seal-Bearer, Priest of Bastet, Priest of Shesmetet, High Priest of Thoth, Overseer of All Construction Projects of the King, and many others. The last is particularly interesting, as it indicates that Hemiunu was most likely the one responsible for building Khufu’s Great Pyramid.

The artistic style of Hemiunu’s statue is remarkable. Many depictions of people and deities were idealized to reflect a desire for perfection in the Afterlife and all eternity. Hemiunu seemed to take a much more realistic approach, which likely reflected how he actually looked. Instead of a young fit man, he appears a little older and corpulent, a sign of prosperity at the time.

Image: Hemiunu statue at the Roemer and Pelizaeus Museum, Germany.

Photo credit: By Einsamer Schütze- Own work, CC BY 3.0