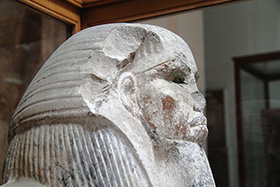 King Djoser (sometimes spelled Zoser), also known as Netjerikhet, ruled Egypt during the Third Dynasty of the Old Kingdom around 2650 BCE. Djoser was the first pharaoh to live only at Memphis rather than traveling between palaces. He also extended Egypt’s power all the way south to Aswan, and north to Sinai.

Djoser is well known for two reasons: First, he is credited with saving Egypt from a seven year famine by re-building the Temple of Khnum, the god of the Nile River’s source. Second, and more importantly, Djoser is known for his funerary monument, the Step Pyramid at Saqqara, which was notably built out of stone blocks rather than mud bricks under the guidance of the famed architect Imhotep. The fact that Djoser was able to end a famine and build such a large monument suggests that during his reign, Egypt was politically and economically stable.

Clayton, Peter A. Chronicle of the Pharaohs: The Reign-by-Reign Record of the Rulers and Dynasties of Ancient Egypt. London: Thames & Hudson, 2006.