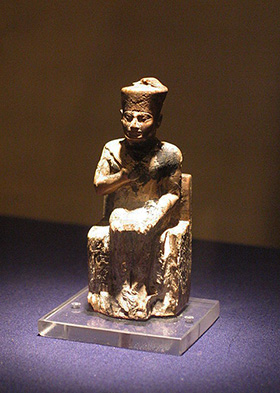 Possibly the most famous Old Kingdom pharaoh, Khufu was the second pharaoh of the Fourth Dynasty. His full name is Khnum-Khufu, or “Protected by Khnum.” The Greeks called him Suphis or Cheops. Existing records show that he could have reigned anywhere from 23 to 34 years; Manetho, a third century BCE historian, even suggested a reign of 63 years. He is believed to have extended the borders of Egypt into the Sinai.

Khufu is also generally believed to be the builder of the Great Pyramid of Giza, which is the largest pyramid ever built and the first in the Giza complex.

Egypt prospered under the pharaohs of the Fourth Dynasty, which is why they were able to fund their massive building projects. Khufu was succeeded by his son Djedefre, whose reign was quite short, and then by Khafre, another of his sons. Khafre was the builder of the second Giza pyramid.