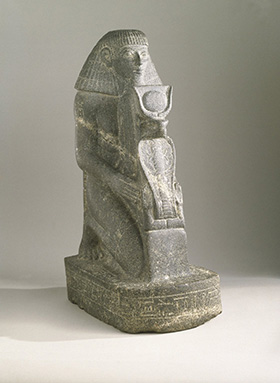 A man of humble origins, the ancient Egyptian Senenmut reached uncommon heights during his lifetime. Amazingly, he earned almost one hundred titles, including “Great Treasurer of the Queen” and “Chief Steward of the King’s daughter.” Senenmut was a close advisor and loyal companion to Queen Hatshepsut. He was also the tutor to Hatshepsut’s only child, a daughter, Neferure. His service probably began during the reign of Thutmoses II, Hatshepsut’s husband.

As the Overseer of Temples and possibly the Chief Royal Architect, Senenmut was responsible for all the major building projects during Hatshepsut’s reign, including her masterpiece Mortuary Temple at Deir el-Bahri. There are even images of him adoring the queen in reliefs in that temple – a rare privilege for a non-royal person. Senenmut managed construction projects in all three Karnak precincts, including the quarrying, transport, and erection of the two magnificent obelisks honoring Hatshepsut, the tallest of their time. It is believed that Senenmut advised Queen Hatshepsut on many issues.

There has been much speculation across the centuries about a possible romantic relationship between Senenmut and Queen Hatshepsut, largely focusing on his unusual rise to prominence and access to the queen and her daughter.

Senenmut is believed to have died around 1464 BCE. Although it is not known where he is buried, two tombs were constructed for him – one, along with a chapel, in the Tombs of the Nobles and the other near Hatshepsut’s Mortuary Temple, again a rare privilege. This second tomb has both the earliest known Egyptian star map and the earliest known inscription of the twelve-month Egyptian calendar painted on its ceiling, and has been designated as a UNESCO Astronomical World Heritage site.