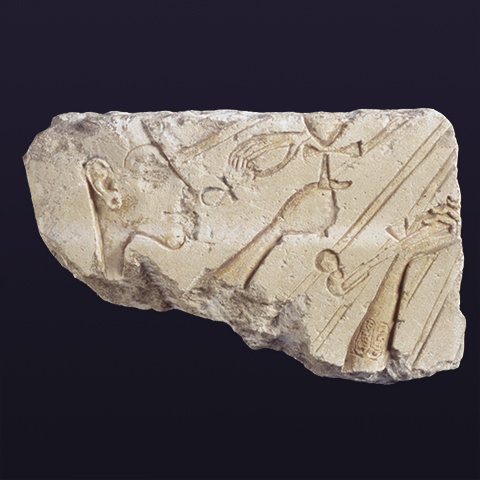 Amenhotep IV, who later changed his name to Akhnaton, was a pharaoh of the late Eighteenth Dynasty and ruled for approximately seventeen years. Before becoming pharaoh, he studied to become a priest and often questioned the polytheistic views of his fellow Egyptians. He believed in one deity, the Aton, which is often represented by the sun disk. Akhnaton believed that the sun was the only symbol powerful enough to represent the unknowable Great Spirit – the Aton. The sun, which provides light and heat and helps plants grow, was enough evidence for him to believe in it. Amenhotep IV was very skeptical about the other deities because they did not possess strong or obvious evidence of their power like the Aton.

When his brother, Thutmose, died, Amenhotep became the heir to the throne. Once in power, he implemented his monotheistic beliefs and changed his name to Akhnaton, which means “The Effective One for the Aton.” He moved the capital cities in Memphis and Thebes to a new city in the desert – Akhetaton, which means “The Horizon of the Aton.”

The art during Akhnaton’s reign changed drastically as well, by adding intimate snapshots of family life, in addition to showing people in softer, less aggressive poses in natural settings. Also, women assumed a more prominent role, especially his beloved wife Queen Nefertiti. It is possible that Nefertiti even became her husband’s official co-regent under the name of Neferneferuaton. Some Egyptologists believe that Nefertiti may have even ruled Egypt alone for a few years following Akhnaton’s death, as the pharaoh Smenkhkare.

Many Egyptians were not happy with Akhnaton’s religious changes, especially the priests of other traditions whose temples were now banned. He was ultimately blamed for a terrible plague that hit Egypt. To erase Akhnaton from history, many temples, statues, and written evidence were destroyed. After his death, the capitals were moved back to Memphis and Thebes and the ancient Egyptians went back to their polytheistic society.

Here is an excerpt from Akhnaton’s reverent poem to his beloved deity - “Great Hymn to Aton”:

Splendid you rise in heaven’s lightland,
O living Aton, creator of life!
When you have dawned in eastern lightland,
You fill every land with your beauty.
You are beauteous, great, radiant,
High over every land;
Your rays embrace the lands,
To the limit of all that you made.
Being Re, you reach their limits,
You bend them for the son whom you love;
Though you are far, your rays are on earth,
Though one sees you, your strides are unseen.
When you set in western lightland,
Earth is in darkness as if in death;
One sleeps in chambers, heads covered,
One eye does not see another.
Were they robbed of their goods,
That are under their heads,
People would not remark it.
Every lion comes from its den,
All the serpents bite;
Darkness hovers, earth is silent,
As their maker rests in lightland.