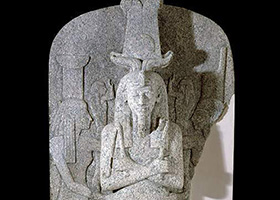 Ramses III was the second ruler of Egypt’s Twentieth Dynasty and was one of the last great Egyptian pharaohs. He reigned during a very turbulent time in the Mediterranean that saw the Trojan War, the fall of Mycenae, and a great surge of displaced people from all over the region that wreaked havoc and even toppled some empires.

Ramses III is well known for his domestic building program, a consolidation of law and order, as well as a tree-planting program. He made huge donations of land to the most important temples in Thebes, Memphis, and Heliopolis. The Mortuary Temple of Ramses III at Medinet Habu includes important texts and artistic depictions of the Sea Peoples, providing valuable information regarding their appearance and accoutrements.

The reign of Ramses III marked the beginning of the decline of ancient Egypt’s greatness, and many scholars consider him to be the last king to yield substantial authority over Egypt. At some point during the later years of his reign, royal tomb workers upset over back pay went on strike, the first in recorded history.

According to the Great Harris Papyrus, Ramses III ruled for 31 years and 41 days. Some evidence points to him having been assassinated in a plot involving one of his secondary wives and her son.

Image: Detail from the granite sarcophagus lid of Ramesses III at the Fitzwilliam Museum, England

Clayton, Peter A., Chronicle of the Pharaohs: The Reign-by-Reign Record of the Rulers and Dynasties of Ancient Egypt. Thames & Hudson, New York, 2006.