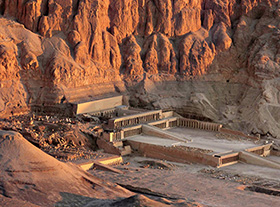 Although Pharaoh Hatshepsut’s stunning temple is the most well-known structure at Deir-el-Bahri, the site also includes two other temples. These temples were dedicated to the worship of the pharaohs who built them, a place where offerings and prayers could be made to them.

The oldest temple at the site is the Eleventh Dynasty temple of Mentuhotep II (reigned ca. 2040-1991 BCE), the pharaoh who re-united Egypt at the beginning of the Middle Kingdom period. His tomb is the earliest mortuary temple showing the pharaoh enacting ceremonies for the deities instead of just receiving offerings from them. The temple also identifies the pharaoh with Osiris, a local Theban deity who grew in importance from then on.

Thutmose III’s mortuary temple was built next to that of his stepmother and co-pharaoh, Hatshepsut. It was dedicated to Amun.

Hatshepsut’s magnificent temple includes a shrine to Amun, as well as chapels for Anubis and Hathor. The walls show scenes from Hatshepsut’s famous expedition into Punt (modern Somalia) and the so-called “Birth Colonnade” which describes the story of Hatshepsut’s divine birth – a story she used to legitimize her rule. The temple was designed by Senenmut and includes a series of terraced colonnades set near a sheer cliff face. Later pharaohs destroyed all images of Hatshepsut in the temple, as well as her other monuments, yet it remains one of the most enduring and beautiful ancient sites in Egypt.