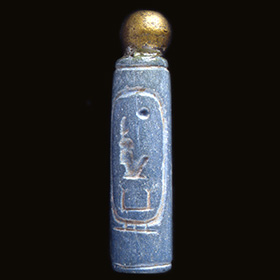 Hatshepsut was the first female pharaoh to rule Egypt with the full power of the position. She ruled for twenty years. Hatshepsut was pharaoh during the Eighteenth Dynasty. After the death of her husband, Thutmose II, Hatshepsut didn’t claim the title as pharaoh of Egypt right away. Instead, she was regent on behalf of her stepson (born to a secondary wife), Thutmose III, who was a young child at the time. After less than seven years, however, Hatshepsut took the unprecedented step of assuming the title and full powers of a pharaoh herself, becoming co-ruler of Egypt with Thutmose III. She claimed to be the child of Amun and transformed herself into a king by wearing the symbols of kingship. She emphasized her right to rule through her bloodline.

Hatshepsut also took a new name, Ma’at kare, sometimes translated as Truth (ma’at) is the Soul (ka) of the Sun God (Re). The key word here is ma’at—the ancient Egyptian expression for order and justice as established by the deities. Maintaining and perpetuating ma’at to ensure the prosperity and stability of the country required a legitimate pharaoh who could speak—as only pharaohs could—directly with the deities. By calling herself Ma’at kare, Hatshepsut was likely reassuring her people that they had a legitimate ruler on the throne.

One important way pharaohs affirmed ma’at was by creating monuments. Hatshepsut’s building projects were among the most ambitious of any pharaoh. She began with the erection of two 100-foot-tall obelisks at the Great Temple Complex at Karnak. Reliefs commemorating the event show the obelisks, each weighing about 450 tons, being towed along the Nile by 27 ships manned by 850 oarsmen.

Her greatest achievement was the enormous memorial temple at Deir el-Bahri, considered one of the architectural wonders of ancient Egypt. The construction was supervised by Senenmut, her loyal advisor. There has been much speculation across the centuries about a possible romantic relationship between Senenmut and Queen Hatshepsut, largely focusing on his unusual rise to prominence and access to the queen and her daughter.

Hatshepsut renewed trade with western Asia to the east, the far-off land of Punt to the south, and the Aegean Islands to the north. The resulting economic prosperity was reflected in the art of the time, which is characterized by remarkable innovations in sculpture and decorative arts.