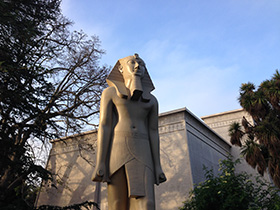 A ruler during the New Kingdom’s Eighteenth Dynasty, Thutmose III expanded Egypt’s borders to their furthest extent, conquering more land than any pharaoh before or after him. He was the son of Thutmose II by a minor wife named Iset. When Thutmose II died, his chief wife and half-sister, Hatshepsut, became Thutmose III’s regent. However, she did not step down when Thutmose III came of age. Instead, she made him a joint pharaoh with her and continued to rule the country herself.

During this time, Thutmose III was made head of Egypt’s armies. In the twenty-third year of his reign (his second year as the sole pharaoh), he led a successful military expedition into Syria and Palestine. He went on to defeat the King of Mitanni in battle and pushed Egypt’s southern border to the fourth cataract of the Nile.

At home, Thutmose III built many temples, including the Festival Hall and Seventh Pylon at Karnak and his own mortuary temple at Deir-el-Bahri. Though he is often blamed for the destruction of his stepmother Hatshepsut’s images, others have argued that Thutmose III’s son, Amenhotep III, may have destroyed them during his reign in order to delegitimize any claim to the throne by Hatshepsut’s children (who, as the offspring of a pharaoh, had as much right to the throne as he did).