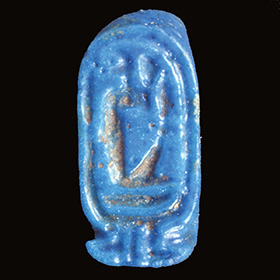 Amenhotep III ruled Egypt for nearly four decades, until his death around 1352 BCE at the age of 48. When he became pharaoh, he inherited a wealthy, powerful state, in part due to the military success of his grandfather, Tuthmoses III. Many scholars say Amenhotep III ruled during the cultural and political apex of ancient Egyptian civilization. His reign was marked by unprecedented prosperity, political stability, and the creation of some of ancient Egypt’s most magnificent complexes, including an elaborate mortuary temple intended for rituals and offerings to honor the pharaoh in perpetuity.

Amenhotep III had many wives. He particularly favored his Great Royal Wife Queen Tiy. Queen Tiy was not royal, however she was the daughter of Yuya, a powerful military leader; therefore, their marriage formed an important political alliance. Tiy gave birth to at least two sons and four daughters. When her first son died, her second son, Amenhotep IV, became the heir. Amenhotep IV later changed his name to Akhnaton after he ascended to the throne. Every inscription, statue, or letter presents Amenhotep III and Tiy as equal partners in both domestic and public life.

During the reign of Amenhotep III, Egypt began to export her culture and goods throughout the Mediterranean and the Near East. The pharaoh was in regular correspondence with the Babylonians, the Mitanni, and the Arzawa. Foreign place names (particularly those of mainland Greece) began to appear in inscriptions during the time of his reign with greater regularity. Examples of Amenhotep III’s diplomatic correspondence with the rulers of Assyria, Mitanni, Babylon, and Hatti were discovered in the Amarna Letters.

Clayton, Peter A. Chronicle of the Pharaohs: The Reign-by-Reign Record of the Rulers and Dynasties of Ancient Egypt. Thames & Hudson, New York, 2006.